Following the appointment of former Chief of the Air Staff, Air Chief Marshal Sir Michael Graydon GCB, CBE as its President, the Royal Air Force Music Charitable Trust was established as a registered charity in 2004 by Sergeant (Ret.) Malcolm Goodman MBE, who was then a serving member of the Band of the RAF Regiment, and also Public Relations and Marketing Manager for the RAF Music Services. In his role as Honorary Administrator, from the charity’s home in Newark he is supported by two other volunteer trustees, Warrant Officer (Ret.) Trevor McDonald and Sergeant (Ret.) John Baigent. As former RAF musicians, all three trustees are also veterans of the First Gulf War, having served together on active service at Field Hospitals in Saudi Arabia during the 1991 conflict. 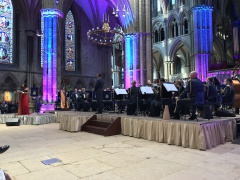 With its charitable objects ‘raising welfare funds through the performance of live music by Royal Air Force musicians’, the charity primarily organises fund raising concerts in locations where the bands might otherwise not be able to perform. Through these concerts and the sale of RAF Music CDs and merchandise, the charity raises funds from which donations are also made to various RAF and other Service charities. However, as RAF musicians routinely undertake deployments in support of H M Forces around the world, the charity also provides welfare support to personnel whilst deployed on ‘out of area’ operations.